On the move, finding pearls: a love story 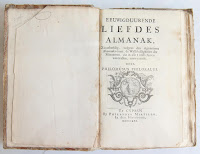 It was only until the end of the eighteenth century that the ideals of Enlightment became generally accepted. Almanacs changed as a result, the astrological predictions made way in favor of other features. Increasingly the compilers of these almanacs replaced the weather forecasts and similar incongruity, in the words of Amsterdam based publisher Theodorus Crajenschot ‘soortgelyke ongerymtheden’, by something more meaningful ‘iets wezenlyks’. For him that was ‘een korte Schets van De kragt der liefde’, a short text about the power of love, written in his Nuttige en aangename staatsalmanach from 1787.
Ever since, love has been a rich source of inspiration for the makers of almanacs. Many flirts have been celebrated, first mainly in short verses which accompanied the calendars and later royally in long poems. In nineteenth century almanacs one can speak of a real ‘romantic story’-boom. Most of them illustrated with beautiful idyllic prints. But there is only one that is way out in front: the Eeuwigduurende liefdes almanak from 1721.

The Eeuwigduurende liefdes almanak is one of the first alamancs that is playfully aimed by the writer and publisher who called himself by the antique name Philomúsus Philokaus, admirer of muse and beauty, and thus puts himself in the mythological tradition. This cheeky man placed elements from traditional calendars in amatory/amorous context, like the twelve months of the year of love ‘de twaelf maenden van ‘t jaer der liefde’. Visit is the first month, Hope the fifth, the eight month is called Connection, Regret the eleventh which is followed by Indifference. Also other elements of life and cycles from the year of love are described in the same style as noted above. 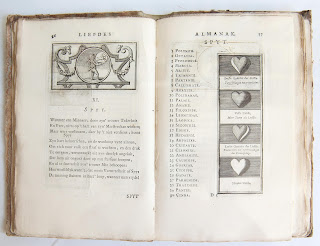 Back to the frolic author of this richly illustrated work, who hid his real identity behind the pseudonyms Philomúsus Philokaus and Philander Mirtillo from Cyprus (which is known as the place where the Roman goddess Venus first touched land after she was born on open sea). Revealing the person behind the almanac became an obsession short after its publication in 1721. Contemporaries tried to light the veil of mystery by spreading pamphlets. This quest ended at the student Albertus van Twist, who aimed to immortalize his impossible love for Johanna Susanna Alensoon. Van Twist, born in Hulst in 1696, registered as a law student in Leiden in 1718. If the pamphlets are right, he paid more interest about lessons of love than the actual law classes. These pamphlets are written by fellow students and other witnesses of Van Twists flirts. The Eeuwigduurende liefdes almanak is thus a key almanac, there are real people behind the fictive names in the poems, which makes this book extraordinary amid other Dutch almanacs. Besides the unusual content, there are more reasons for this book to be very special. Already in the early eighteenth century, right after publishing, this book was rare, concluding by the fact that in later years the author himself bought copies of the book. During all centuries the almanac has always been appreciated. A small note which is found in the book tells one that on November 12th 1931 the book was to be sold at the price of 25 gulden, a little fortune at that time (comparable with 500 euros nowadays). 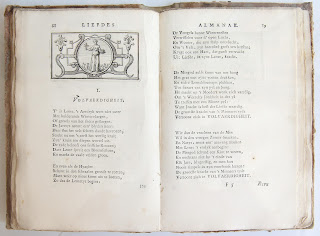 You might want to know what happened to the romantic Mister Van Twist. Luckily everything turned out well for him. He promoted in 1721, the year of publishing, and moved back to Zeeuws-Vlaanderen, where he got married twice, gave life to a lot of children and finally made it to bailiff.

Note to all Dutch readers: on the website of the Digitale bibliotheek der Nederlandse Letteren (DBNL) one can find an interesting article about the Liefdesalmanak. Please find attached a link to the article ‘Een Leidse student op vrijersvoeten’ by Bianca Nesselaar: http://www.dbnl.org/tekst/_med009199601_01/_med009199601_01_0014.php

Benthe van Houtum
Posted by Arine at 5:27 AM