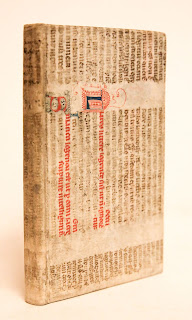 As you may know we, at Van der Steur, live amongst the mysterious history of more than 40.000 books and prints. Logically we are unable to read each and every one of them. This is why it can be very refreshing when a new intern stumbles upon an object that tells a greater story than just the one that is written inside. When our intern Sterre van der Sijde took a book from the shelf in our section dedicated to classical literature she noticed immediately that the book in her hands was special. This beautiful work, titled Fabulae Aesopi Graecè & Latinè is not bound in linen, leather or blank parchment as could be expected. Oddly enough it is bound in a parchment manuscript page with rubrication (sentences in red ink) and decorated initials. 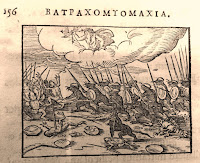 When opened, the book shows that it concerns the 1672 version of the fables of the Greek slave Aesopus (600 BC) and those of the Latin poet Avianus (400 to 500 AD), written in Greek and Latin in parallel columns.

The book concludes with the poem ‘Batrachomyomachia’ or ‘Battle of the frogs and mice’, attributed to Homer. This book was first published in Amsterdam in 1626 as a study book for Latin and Greek scholars. The particular edition was provided by the academic Daniel Heinsius (1580-1655) from Leiden and copied at least eleven times without any major changes. It appeared to be in use for this purpose until 1727. 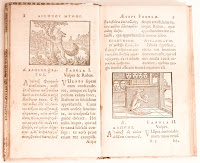 Can you remember how your study books looked after toiling with them for a year? If they looked a bit like mine I find it astonishing that this small fable book survived this well for almost 350 years. 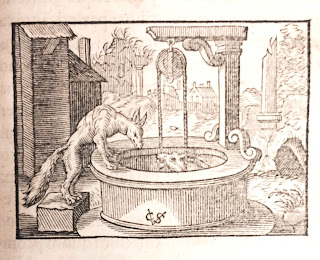 The fables in this book feature exquisite woodcarvings by the Swiss/Dutch woodcutter and engraver Christoffel van Sichem (1581-1658). Van Sichem made prints after portraits by his father, Christoffel van Sichem the Elder, and leading artists such as Bloemaert and Goltzius. For this fable book he made forty-one beautiful illustrations. The clearness of the cuts gives a modern feel to the plates. The illustration on page 73, ‘the fox and the goat’, is the only woodcut left that shows the monogram of van Sichem.


Besides the unusual binding, function and decoration there is definitely something else to talk about. On the recto of the first flyleaf, in between the stamps of institutions that previously owned the book, is an indication present of two V.I.P. from the past. The handwritten text: “Ex libris Joh: Conradi Zwinglij. Ao: 1693” and “Martini Usterii 1780”. The first name 'Johannes Conradi Zwinglij (Zwingli)' sounds familiar because the surname Zwingli was made famous by the Swiss reformer Huldrych Zwingli (1484-1531). Whether Johannes Conradi is a distant relative is not clear. The second name mentioned is Martini Usterii, better known as Johann Martin Usteri (1763-1827).

Usteri, who was 17 when he signed this little book, was a famous swiss poet and engraver who was best known for his romantic idylls and historical prints. It's quite interesting to imagine to what extent an artist like Usteri could have been influenced by the fable illustrations he saw in his youth. 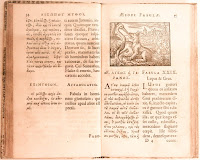 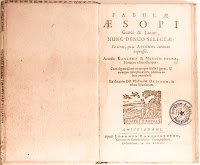 If there is one thing that we have learned from this little work of art, it is that our collection is like a treasure chest waiting to be discovered.

Sanne Hansler
Posted by a.bianco at 7:07 AM