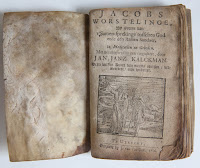 In a world in which human existence is constantly changing, it is a permanent struggle leaving behind the old and accepting the new. Letting go of something that is deeply cherished never goes without pain, struggle and suffering. This is not just a contemporary theme, but was already touched on in the old Bible story of Jacob wrestling with God which has inspired many authors over time. 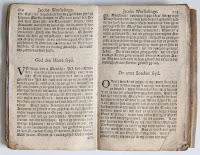 To know Jacob’s story is to know that his life was one of never ending struggle. Early in his life, God promised Jacob that he would create not only a great nation through Jacob, but a whole company of nations. This expectation made Jacob a man of fears and anxieties, fearful that this was about to happen at any moment. He was also afraid that his brother would carry out his vow and kill him. Anxious for his life, Jacob concocted a bribe and sent a caravan of gifts along with his women and children across the River Jabbok in hopes of pacifying his brother. Physically exhausted, alone in the desert wilderness, facing certain death, Jacob was divested of all his worldly possessions. He was powerless to control his fate. He collapsed into a deep sleep on the banks of the Jabbok River. He had a vision of two family members who wanted to kill him but he was too spent to struggle any more. However, his real struggle actually began at this point. After fleeing his family history, wrestling with God Himself was a different matter altogether.

One night an angelic stranger visited Jacob. They wrestled through the night until daybreak, at which point the stranger crippled Jacob with a blow to his hip that disabled him and left him with a limp for the rest of his life. It was by then Jacob knew what had happened. “I saw God face-to-face, and yet my life was spared” (Genesis 32:30). In the process, Jacob the deceiver received the new name Israel, “He struggles with God.” However, the most important event occurs at the conclusion of that struggle: God “blessed him there” (Genesis 32:29).

The book starts with the “voorreden aan den christelijke lezer” – an introduction to the Christian reader – by J.J. Kalckman. Kalckman attracted a lot of attention with his work Antidotum, tegengift vant gebruyck of ongebruyck vant orgel, which he wrote only one year before his death in 1641. This work was a direct critical response to the work of the Dutch Golden age poet and composer Constantijn Huygens (1596 – 1687), and is a plea against the use of the organ during Christian/religious worship.

But it is Kalckman’s narration of Jacob wrestling with God that Antiquariaat Van der Steur is proud to have in its collection. This very rare book, printed in the smallest letters –  the reader too wrestles through the pages – and vellum covered, celebrates its 300th year of existence this year. It is a beautiful little book, a true historical treasure. Amen.

The Masoretic Bible text reads as follows.:
The same night he arose and took his two wives, his two female servants, and his eleven children, and crossed the ford of the Jabbok. He took them and sent them across the stream, and everything else that he had. And Jacob was left alone. And a man wrestled with him until the breaking of the day. When the man saw that he did not prevail against Jacob, he touched his hip socket, and Jacob's hip was put out of joint as he wrestled with him. Then he said, “Let me go, for the day has broken.” But Jacob said, “I will not let you go unless you bless me.” And he said to him, “What is your name?” And he said, “Jacob.” Then he said, “Your name shall no longer be called Jacob, but Israel, for you have striven with God and with men, and have prevailed.” Then Jacob asked him, “Please tell me your name.” But he said, “Why is it that you ask my name?” And there he blessed him. So Jacob called the name of the place Peniel, saying, “For I have seen God face to face, and yet my life has been delivered.” The sun rose upon him as he passed Peniel, limping because of his hip. Therefore to this day the people of Israel do not eat the sinew of the thigh that is on the hip socket, because he touched the socket of Jacob's hip on the sinew of the thigh.
— Genesis 32:22-32