When an intern stumbles onto Sappho

Come to me now thus, Goddess, and release me
From distress and pain; and all my distracted
Heart would seek, do thou, once again fulfilling,
Still be my ally!
-        From “Ode to Aphrodite” by Sappho, translated by John Myers O’Hara

When I first started my internship at ‘Antiquariaat van der Steur’ I was happy to discover that they had a large collection of Classical Literature.
These books are still such an important part of today’s literature, so I was glad to examine these books. The first few works I focused on were already very interesting: the first one happened to be a fable book with beautiful binding, but my eye was caught by book. At first sight, it was not the most special book on the shelves at ‘Van der Steur’, but this work contained some overwhelming poems. These poems are written by Sappho, one of my favourite authors in Classical Literature and as it appeared also one of the favorite authors of Arine. This surprised me, because her name is not well known in general. 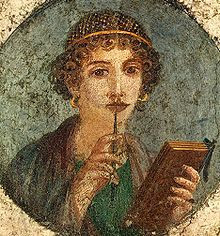 Sappho was a Greek woman of whom's life not much is known for certain. Everything we know is from her own poetry, but this is not necessarily biographical. What we do know though is that she was from the island of Lesbos and was probably born into an aristocratic family. Today, most of her poetry is lost. Only fragments remain on papyrus, or as quotations in other ancient works. Sometimes a whole poem has survived and sometimes as little as a single word. The oldest surviving fragment of Sappho is the Tithonus poem, found in 1922. The only poem that has survived completely is Ode to Aphrodite. It was preserved in ‘Dionysius of Halicarnassus’ On Composition’, where the writer quoted the full text of the poem as an example of “smooth” or “polished” writing. The poem was also partially preserved on a second century papyrus roll, discovered at Oxyrhynchus in Egypt.

Sappho’s poetry is known for its clear language, simple thoughts and use of direct quotation. She also uses unexpected word-play quite often. An example from fragment 96:

This is a variation of the Homeric epithet “rosy-fingered Dawn.”
In antiquity Sappho’s poetry was highly admired and she was referred to as the “tenth Muse”. She influenced other ancient poets, such as Catullus and Ovid, who wrote a poem as a letter from Sappho to her supposed love Phaon. Even in modern literature Sappho is of great influence for other poet. For example Housman and Tennyson, who re-wrote the Tithonus poem of Sappho. 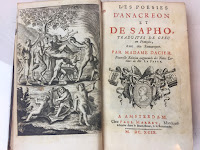 In the 20th century however, Sappho was not known for only her poetry, but she became a symbol of homosexuality, although her sexuality is still debated. She wrote a lot of poems about unrequited love for other women, who she taught at school, but she also wrote her poems for men. There are still a lot of controversies around her life. Her poetry though is written so thoughtfully and with such grace, that her sexuality is of minor detail. This feeling of unrequited love is universal and I believe that this is the main reason why so many people are influenced and touched by her poetry. 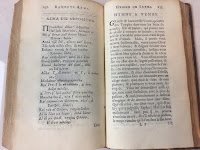 Anne Dacier was not an experienced translator when she translated this work, but after this work she translated quite a few Greek and Latin texts, including the Illiad and Odyssey by Homer, Greek tragedies, Latin comedies and the works of Horatius, Callimachus and Aristophanes.
This book initiated a stellar career for Anne Dacier.

Sterre van der Sijde
Posted by Arine at 8:01 AM