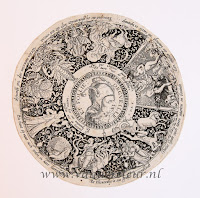 Published c. 1580 this plate, Pride and Folly, belongs to a series of four designs for tazzas by de Bry. It is a medallion with a double head: if turned around the print shows a profile of a satyr, reminding of Folly. The border is decorated with fantastic creatures, themes and symbols referring to Superbia like a peacock, the mistress of Babylon, the fall of Phaeton, the Fall of Marcus Curtius, Adam and Eve under the tree. The other four plates of the set feature the same characteristics: a medallion included in a wide border with grotesques with figures, animals and vines on a dark ground. The border around the medallion and the outer edge feature Dutch and French verses.

It has been suggested that the male profile might be that of Pope Paul IV (born Gian Pietro Carafa, 1476-1559) who instituted the Inquisition as a political organ of the Church, to control not only dogmatic issues but also political and economical businesses. Under his papacy was introduced the 'Index librorum prohibitorum' and 'ghettos' for the Jews were institutionalized with the 'Cum nimis absurdum' bull (1555). This bull revoked all the rights of the Jewish community and placed religious and economic restrictions on Jews in the Papal States, renewed anti-Jewish legislation and subjected Jews to various degradations and heavy restrictions on their personal freedom.